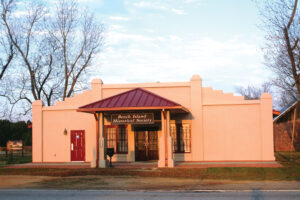 First discussed by a group of 14 interested individuals in the winter of 1985, the group held their first meeting on March 19, 1985 at the All Saints Episcopal Church. Under the leadership of its first president, Harold Maness, the society became a non-profit corporation under SC law on September 9.

The very next year the society held the Beech Island Tricentennial Celebration at Redcliffe State Park which drew more than 10,000 visitors. Since then the society made it a yearly event known as Beech Island Heritage Day which was held for 20 consecutive years.

The society voted to end Heritage Day in 2006. In 1991, the heirs of George McElmurray, one of the society’s charter members, donated to the society one acre of land, a four-room meeting hall and a large warehouse. The society dedicated its building to the late George McElmurray and the Beech Island Historical Society History and Visitor’s Center was opened for visitors and tourists.

On April 3, 1998, the society won the Progress Award for the Visitors and History Center building at the Confederation of Local South Carolina Historical Societies in Columbia, SC. Presently, the society has grown to a membership of over 300. Meetings are held monthly from September to March on the third Tuesday of the month at 7:30 pm at the society’s meeting hall. These meetings are open to the public.

The Beech Island Historical Society meets every 3rd Tuesday of the month at 7:30 p.m. September through March at the society’s office at 144 Old Jackson Highway. The public is invited to attend.